The first stage is to catch low hanging fruits, like identifying and removing dead code, removing duplicate code, and reduce method length. At this stage the following measures would be helpful:

The next stage is to start thinking of pulling apart components, whether business (or functional) components or utility components. This re-organization of code is essential to break the complexity of code and will open a large list of refactoring opportunities. At this stage, we will add the following two measures:

THE THIRD Q: BUILD QUALITY IN

The last stage is to start writing unit tests to test component interfaces. This is necessary so that to baseline the code quality and start doing more profound refactorings. At this stage, we will add the following measure:

Refactoring : A change made to the internal structure of software to make it easier to understand and cheaper to modify without changing its observable behavior.

Code refactoring is the process of restructuring existing computer code – changing the factoring – without changing its external behavior. Refactoring improves nonfunctional attributes of the software. Advantages include improved code readability and reduced complexity to improve source code maintainability, and create a more expressive internal architecture or object model to improve extensibility. Typically, refactoring applies a series of standardised basic micro-refactorings, each of which is (usually) a tiny change in a computer program’s source code that either preserves the behaviour of the software, or at least does not modify its conformance to functional requirements. 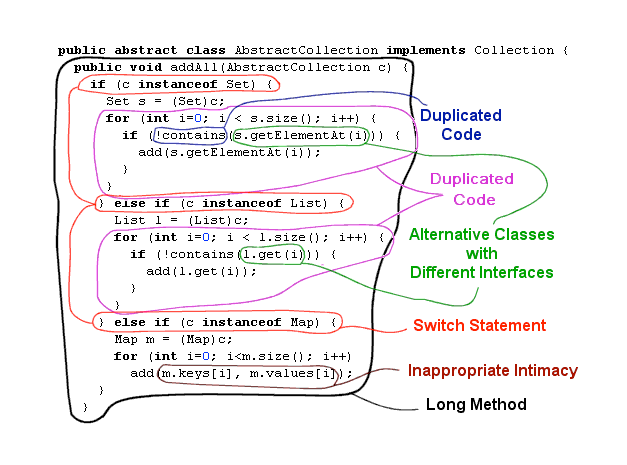 I’ve been asked, “Is refactoring just cleaning up code?” In a way the answer is yes, but I think refactoring goes further because it provides a technique for cleaning up code in a more efficient and controlled manner. Since I’ve been using refactoring, I’ve noticed that I clean code far more effectively than I did before. This is because I know which refactorings to use, I know how to use them in a manner that minimizes bugs, and I test at every possible opportunity.

I want to reiterate that refactoring does not change the observable behavior of the software. The software still carries out the same function that it did before.

As you develop software, you probably find yourself swapping hats frequently. You start by trying to add a new function, and you realize this would be much easier if the code were structured differently. So you swap hats and refactor for a while. Once the code is better structured, you swap hats and add the new function. Once you get the new function working, you realize you coded it in a way that’s awkward to understand, so you swap hats again and refactor. All this might take only ten minutes, but during this time you should always be aware of which hat you’re wearing.

Please note that testing the while refactoring is very import. Always make small changes, test them commit them and make other changes. Do not thing to make all changes in a singe go and later on test entire application at the end. Multiple small cycles of refactor– test – refactor –test and smile