##Adding Tree For the sake of simplicity, I chose to use an alias for the tree command rather than creating a new directory and altering my function search path to read that directory. I searched the web for a bit and found a solution that worked perfectly. Simply open up your .zshrc file and add this code:

now return to the command line and run:

For those who are unaware, the tree function is a useful shell command that displays the file structure of a given directory in a visual manner. For example, if I am in a directory titled my_blog and within that directory have three folders html, css and js, tree would show something like this:

Take a simple mathematical operation like addition. Addition takes 2 inputs and produces 1 output (the sum of the two inputs). If you know the 2 inputs, the output is easy to calculate – and there’s only one answer.

But if you only know the output, how do you know what the two inputs are?

Now you might think that it doesn’t matter – if the two inputs sum to the correct value, then they must be correct. But no.

What happens in a real hash function is that hundreds of one-way operations take place sequentially and the results from earlier operations are used in later operations. So when you try to reverse it (and guess the two inputs in a later stage), the only way to tell if the numbers you are guessing are correct is to work all the way back through the hash algorithm.

If you start guessing numbers (in the later stages) wrong, you’ll end up with an inconsistency in the earlier stages (like 2 + 2 = 53). And you can’t solve it by trial and error, because there are simply too many combinations to guess (more than atoms in the known universe, etc)

In summary, hashing algorithms are specifically designed to perform lots of one-way operations in order to end up with a result that cannot be calculated backwards.

Since this question seems to have attracted some attention, I thought I’d list a few more of the features hashing algorithms use and how they help to make it non-reversible. (As above, these are basic explanations and if you really want to understand, Wikipedia is your friend).

All of this adds up to a situation where the easiest way of finding a matching hash is just to guess a different input, hash it and see if it matches.

Lastly, if you really want to know how hard reversing a hash is, there’s no better substitute than just trying it out for yourself. All good hashing algorithms are openly published and you can find plenty of code samples. Take one and try to code a version that reverses each step; you’ll quickly discover why it’s so hard.

A webhook (also called a web callback or HTTP push API) is a way for an app to provide other applications with real-time information. A webhook delivers data to other applications as it happens, meaning you get data immediately. Unlike typical APIs where you would need to poll for data very frequently in order to get it real-time. This makes webhooks much more efficient for both provider and consumer. The only drawback to webhooks is the difficulty of initially setting them up.

Webhooks are sometimes referred to as “Reverse APIs,” as they give you what amounts to an API spec, and you must design an API for the webhook to use. The webhook will make an HTTP request to your app (typically a POST), and you will then be charged with interpreting it.

The first step in consuming a webhook is giving the webhook provider a URL to deliver requests to. This is most often done through a backend panel or an API. This means that you also need to set up a URL in your app that’s accessible from the public web.

The majority of webhooks will POST data to you in one of two ways: as JSON (typically) or XML (blech) to be interpreted, or as a form data (application/x-www-form-urlencoded or multipart/form-data). Your provider will tell you how they deliver it (or even give you a choice in the matter). Both of these are fairly easy to interpret, and most web frameworks will do the work for you. If they don’t, you may need to call on a function or two.

There are a couple things to keep in mind when creating webhook consumers:

Get Your Feet Wet

The best way to truly understand a webhook is to try one. Luckily, lots of services use webhooks so you can easily play with them to your heart’s content. Check out some of the webhooks below:

First log in on A as user a and generate a pair of authentication keys. Do not enter a passphrase:

Now use ssh to create a directory ~/.ssh as user b on B. (The directory may already exist, which is fine):

A note from one of our readers: Depending on your version of SSH you might also have to do the following changes:

Especially when you print dicts in logs for rest apis, where in you need to reuse them, it is always good practice to use json.dumps and print them as json instead of dict.

here are all shortcuts

As name suggested Memcached is cache which could be though of as big key value pair bucket residing on RAM which can deliver frequently used data instantly by avoiding datasource access.

Memcached is a general-purpose distributed memory caching system. It is often used to speed up dynamic database-driven websites by caching data and objects in RAM to reduce the number of times an external data source (such as a database or API) must be read.

Memcached’s APIs provide a very large hash table distributed across multiple machines. When the table is full, subsequent inserts cause older data to be purged in least recently used (LRU) order.[3][4] Applications using Memcached typically layer requests and additions into RAM before falling back on a slower backing store, such as a database.

Converting database or object creation queries to use Memcached is simple. Typically, when using straight database queries, example code would be as follows:

The client would first check whether a Memcached value with the unique key “userrow:userid” exists, where userid is some number. If the result does not exist, it would select from the database as usual, and set the unique key using the Memcached API add function call.

However, if only this API call were modified, the server would end up fetching incorrect data following any database update actions: the Memcached “view” of the data would become out of date. Therefore, in addition to creating an “add” call, an update call would also be needed using the Memcached set function.

This call would update the currently cached data to match the new data in the database, assuming the database query succeeds. An alternative approach would be to invalidate the cache with the Memcached delete function, so that subsequent fetches result in a cache miss. Similar action would need to be taken when database records were deleted, to maintain either a correct or incomplete cache.

As world is becoming a big family with globalization, we need the standard to followed to avoid confusion especially related to date and time. If every country or person would write dates in different format, it would be confusing to figure out exact date while doing communication across countries, hence ISO has come up with ISO date format to be followed by every one.

International Standard ISO 8601 specifies numeric representations of date and time. This standard notation helps to avoid confusion in international communication caused by the many different national notations and increases the portability of computer user interfaces.

Advantages of the ISO 8601 standard date notation compared to other commonly used variants:

There are times when we need to save the steps or commands of mongo shell and need to get it executed in the same order (for reusability and automation and avoid errors). The best solution is to save it in a file with any extension preferred is js, however I call it as mjs which means mongo javascript. With below command you can run it in bash

TIP : To be effective while writing query, you write commands using IDE to use auto complete, formatting, Json format verification and then redirect input to mongo

Bookmarking or saving locations to the app is handy but who searches for their friends’ place by address? Without the ability to rename the address to something more recognizable, you’d likely forget which address is where.

However, when you search for an address or locate current location and save it to the list, you won’t be able to rename the address through the app into something more recognizable. Let’s try to fix that.

We’re going to show you how to rename saved locations for the Google Maps app for both iOS and Android users.

Saving A Location On Google Maps 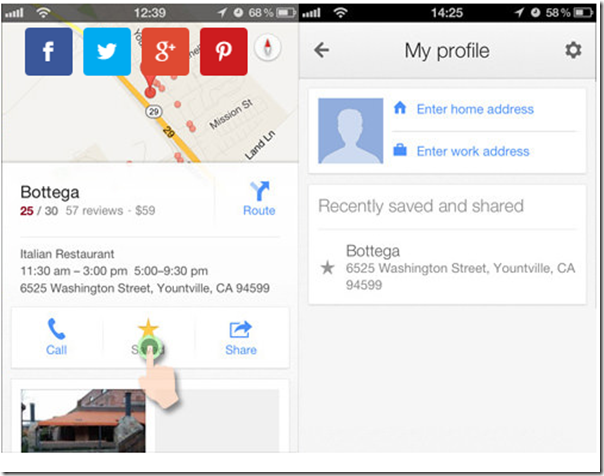 Saving a landmark through the Google Maps app is great as you’ll be able to see the store name, together with the address at the bottom like what you see below. 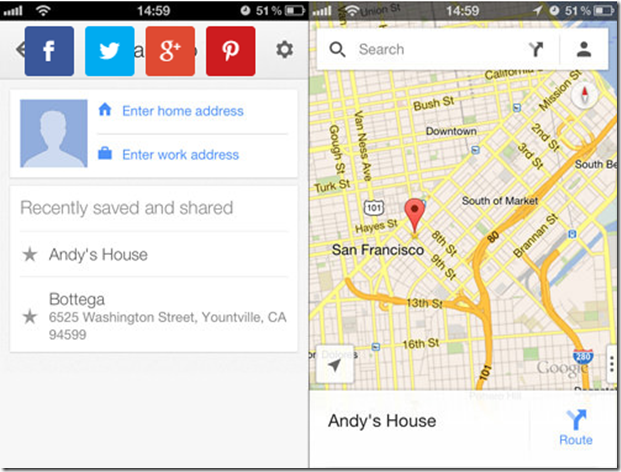 To rename an address, navigate on your browser towww.google.com/bookmarks. Once you’ve logged in, you’ll be able to see all the locations you’ve saved through the Google Maps app.

Click on Edit to change the name of the address and click on Save when you’re done. 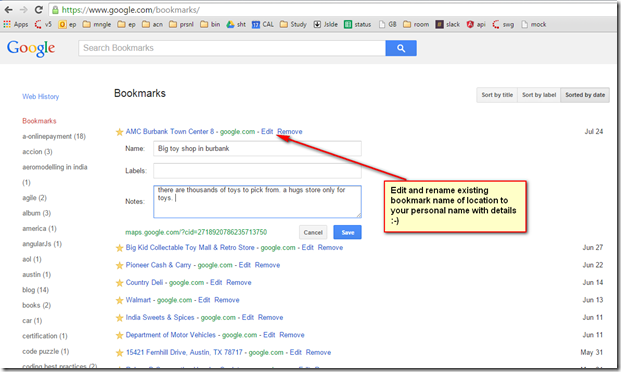 Hope you enjoyed our quick-tip of renaming bookmarked or saved locations on the Google Maps app which works for both iOS and Android users.