A method is on an object.
A function is independent of an object.

For C++ it would depend on whether or not you’re in a class.

def orphan_function() :
print “I am not part of class so can never be called method”

The example given shows you a class called “Door” which has a method or action called “open”, it is called a method because it was declared inside a class. There is another portion of code with “def” just below which defines a function, it is a function because it is not declared inside a class, this function calls the method we defined inside our class as you can see and finally the function is being called by itself.

You need to add/delete an item in an ArrayList when you are iterating the list. You will receive the java.util.ConcurrentModificationException exception. For example, the following code will throw an exception after adding an item into list:

To avoid java.util.ConcurrentModificationException exception, we can add an item through the iterator of list. If we do the same as the above code, the next access item in list via the iterator will generate the same exception.

here is the link
http://code.google.com/p/wicket-dnd/

here is the same code, simple define source and target 🙂

An interface defines a protocol of behavior and not how you should be implemented. A class that implements an interface adheres to the protocol defined by that interface.

All fields declared within an interface are implicity public, static, and final. Why?

In general, a field declaration may include the following modifiers: public, protected, private, final, static, transient, volatile. But only public, final, and static are permitted for interface’s variable.

To find all tables that referenced “Organization” table use the following SQL query: 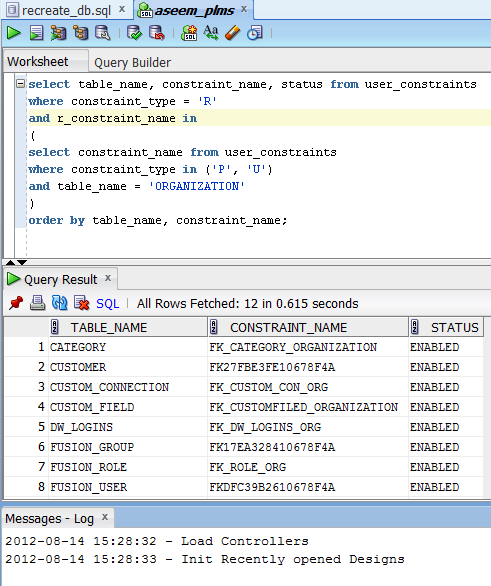 NOTE: In the query above ‘ORGANIZATION’ can be replaced with the name of any table you are interested in.

It is always good to test the working and output of your unit. But it is more important to test the negative behavior to make application robust. What if you are expecting an exception from a part of code which is not thrown. the point where application has to get terminated, it is moving smoothly to get a dead lock or a pitty crash. Just to save such situation Testing of exception generation is code is very important. There are annotation in TestNG frame work which helps to make is an easy task.

In above example, the divisionWithException() method will throw an ArithmeticException Exception, since this is an expected exception, so the unit test will pass.

More advanced example can be observed in the snap shot attached.
Where the scenarios to test says – “Calling this method with null argument throws Exception”.
The test will go green if exception is thrown, else it will go red.

By default Hibernate persists the enumeration value as integer in the database when type param is not specified, In order to store the enum display name, we use a param type, which should be pointed to value in java.sql. Instead of leaving the input open it is a better practice to confine the possible input values in the form of enum. For example, A product can have limited number of state like available, out of stock etc. If we will leave the input out open there are chances of confusion causing data errors eventually. However, if we create the input enum then, changes of data error becomes less.
The details is mentined in the diagram attached.

You might be curious to know how would it persist in the Database table. Below snap shot explains it. Please care of the comments mentioned in the diagrams.

You are sure that the caller method will pass the some object when calling this method, but some if this method is passed with null value than null pointer exception will spoil the look and grace of your software. so to mitigate that, java short circuit are there for rescue. You just need to add the null gurad with short circuit operator and you have got protection against null.

You might expect Java to ask itself if 0 equals 1, and then ask if 2 + 2 equals 4. But with Java’s &&
operator, that’s not what happens. Instead, Java does the following:
Evaluate 0 == 1, discovering that 0 == 1 is false.
Realize that the condition (0 == 1 && whatever) can’t possibly be true, no matter what
the whatever condition happens to be.
Return false (without bothering to check if 2 + 2 == 4).
The condition (0 == 1 && whatever) has to be false, because 0 == 1 is false. (Remember,
the && operator wants both conditions, on its left and right sides, to be true.)
So when Java finds the value on the left side of an && operator to be false, then Java gives up and
declares the entire expression to be false. That’s called short circuit expression evaluation.  The same
kind of thing happens with the || operator (another short circuit operator) when the value on the
operator’s left side is true.

Realize that the condition (2 + 2 == 4 || whatever) must be true, no matter what
the whatever condition happens to be.

While writing unit tests it is a good practice to clear and flush the session. When application is executed in real time there are several request and response or different transactions due to which the session/cache gets cleared. However while running unit test, everything happens as the part of single process ie the session (especially hibernate) has rotten values or old references which gives some exceptions at times.

Hence it is always a good practice to clear/flush session after repository calls or hibernate transactions to make unit test case robust.

The adapter pattern is a structural design pattern that allows you to repurpose a class with a different interface, allowing it to be used by a system which uses different calling methods.

A square peg in a round hole

The Adapter pattern translates one interface for a class into a compatible interface. It is used when two classes could conceptually work together but cannot because of implementation details. For this example, I create a few simple classes modeling the problem of fitting a square peg into a round hole. A square peg will sometimes fit into a round hole, as illustrated in figure depending on the relative sizes of the peg and the hole:

To determine if a square will fit into a circle, I use the formula shown here 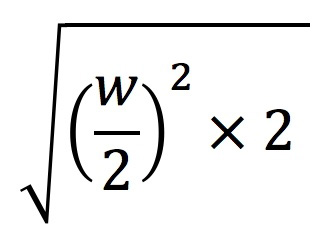 Figure 2. Formula for determining if a square will fit into a circle

I could trivially solve the square peg/round hole problem with a simple utility class that handles conversions. But it exemplifies a larger problem. For example, what if I’m adapting a Button to fit on a type of Panel that it wasn’t designed for yet can be made compatible with? The problem of square pegs and round holes is a convenience simplification of the general problem addressed by the Adapter design pattern: adapting two incompatible interfaces. To enable square pegs to work with round holes, I need a handful of classes and interfaces to implement the Adapter pattern, as shown in Listing 1:

Listing 1. Square pegs and round holes in Java

To reduce the amount Java code, I’ve added an interface named Circularity to indicate that the implementer has a radius. This lets me write the RoundHole code in terms of round things, not just RoundPegs. This is a common concession in the Adapter pattern to make type resolution easier.

To fit square pegs into round holes, I need an adapter that adds Circularity to SquarePegs by exposing a getRadius() method, as shown in Listing 2:
Listing 2. Square peg adapter

To test that my adapter does in fact let me fit suitably sized square pegs in round holes, I implement the test shown in Listing 3:
Listing 3. Testing adaptation

In Listing 3, for each of the proposed widths, I wrap the SquarePegAdaptor around the creation of the SquarePeg, enabling hole’s pegFits() method to return an intelligent evaluation as to the fitness of the peg.

This code is straightforward, because this is a simple albeit verbose pattern to implement in Java. This paradigm is clearly the GoF design-pattern approach. However, the pattern approach isn’t the only way.